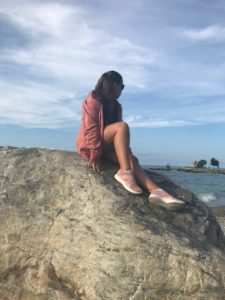 My siblings were not enthusiastic to head down to Sunset point with her, but generally, I would go with her. Honestly, as a mother, I see now it was her way to get away from us and have a moment of peace to herself. The Bay had a way of washing all the cares of the day away. Fast forward 45 years and the Bay she has a way of doing the same thing for me.

Do you remember when Sunset Point had a Trailer park?

Do you remember when there were Hibachi’s everywhere and families would fight for a spot? We always seemed to bring hamburgers and hot dogs, I wished for steak that I could smell cooking away at the next Hibachi.

Do you remember when no one in town wanted to go to Sunset Point, it was the dirty East Side?

Do you remember the canteen?

Do you remember when the current pier had a ship?

Do you remember swimming out to black rock?

Do you remember going out with all the local boys as they shot slingshot rocks at the seagulls?

Do you remember when there was no bike path, no Inuckshuk, no chip truck?

Do you remember the park with the swings that if you pumped hard enough it would pull it from the ground?

Do you remember the spinning metal death trap?

Do you remember in 2004 when I moved back to Collingwood and took my husband swimming and we were the ONLY ones there?

Last weekend I decided to go and see what all the Hubbub was about at Sunset point. Here is what  I found.

A bunch of families having an amazing time at a place that God blessed me with a birth address 52 years ago.

We biked by the amazing smell of some Korean BBQ, some chicken, some hot dogs, and hamburgers. Families, like my husband’s pulling out the rice cooker at the end of the table to serve the family. Other families unwrapping the Tupperware with what I hoped was egg salad sandwiches…a girl can imagine!

Most of the families were in family pods, keeping distance from other families. Please remember that in many cultures families live in multi-generational homes, they respect their elders. Gramma’s and Grampas live with the family instead of being dropped off at a nursing home and forgotten about. Family pods can easily be 10-15 people.

Were there some issues, sure. Mostly Parking. PARKING!! And the fact that there are very few Bathrooms for that many people.

PARKING and BATHROOMS…those are the issues as I see them. I am sure that there could also be more garbage and recycling cans made available as well.

I carried so much pride that my town is so beautiful that all of these people want to visit it, not for the shops, or the merchandise but for the sheer beauty of the Bay. I have loved her through all of her changes and I am proud that she is a part of my soul.

Well, all you complainers, you got your way, the BBQ’s have been banned, was it really that big a deal?

But is there more parking, paid parking even? Are there more Porta Potties?………NO!!!

I can only imagine what it is like to be in a large city or even a small city with the hot summer that we have had. It is time we realize that we were just lucky enough to be born or move to this address, this beauty is all God’s, not ours.