Life as a White Mom of a Black Child

My view from here..atop my soapbox!! 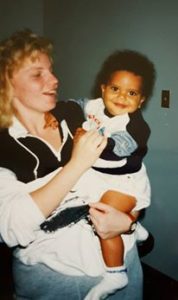 Nope, he is not adopted, but his skin colour to the rest of the world is that of a black man. He doesn’t look mixed, especially to white people. I think that universally the comment we get the most is “YOU are his mom?” Yes, I am and proud to be. To be his mom is the greatest joy ever, my heart broke open to a love I never knew existed until he was born.  On the journey to being his mother, I will tell you that I was called “Nigger Lover” to my face more often than I care to ever put a voice to.

I have lived my adult life as a witness to a child that was not offered the same life as me. I have witnessed my son be treated better once the “white mom” enters the scene. I have held him through tears of jokes kids brought to school, by kids who thought they were being funny. I have had conversations with too many principals on why their teachers and the students have no right to speak to him and treat him the way they do. I had to clarify that the word “Nigger” used for “fun” is not appropriate, anywhere, but especially a school environment.  I have witnessed him being pulled over for doing nothing, as I drove in front of him on the same road.

If you think this doesn’t shape how he sees the world, you are wrong. If you think he hasn’t constantly felt he had to prove the value of his existence to society, you are wrong. He is very aware that I live and am afforded a different life than he.  And now during a racial uprising, he gets bombarded with people saying I didn’t know racism still exists, well that statement alone slaps the face of any person who is not white who has had to endure systemic racism for years. Instead of assuming through your eyes that it does not exist, why not ask someone of another race with a skin colour different from white if racism still exists. I will guarantee you your perspective will change.

Sadly, over the years. I have witnessed, first hand, many times when black mothers have tried to speak out for their children, it is generally a harder fight. But for me, the white momma, things get done. The irony is, my son’s DNA is 50% white, but he will NEVER be afforded white privilege. You might want to read that sentence again!!

The hardest part of me watching the news, when racially motivated events happen, is the surprise of my white counterparts. All of these well-meaning white people are surprised that somehow racism still exists, and I am here to tell you, you may be a large part of the problem that it still does, as am I.

You see the white people who are racist know it exists, and they have convinced themselves that you are too.  Here’s why. The racists are the ones who tell the Paki and Nigger jokes, but you are the one who laughs nervously, and think it isn’t a big deal, just a joke right!! Well, guess what, your kid who heard that joke, told that joke to my nigger kid the next day!! They don’t see a problem with it because you didn’t say to the guy at the backyard bbq, that is inappropriate, please don’t tell those jokes.

When we as white people don’t stop the small indiscretions of our friends and family members, then we give fuel to the racists. That is what they want and that is their hope. For anyone who does not see White Nationalist/ Supremacist groups as the EXACT same thing as Islamic Extremists, then you have your head under a rock and you need to lift off the rock!! White Nationalists are “recruiting” and rallying at an alarming rate once again.

Because all of us well-meaning white people thought that racism didn’t exist anymore. So we fell asleep, well-meaning, loving people…but we fell asleep!! I implore you to wake up, take off the blinders and take action against the small indiscretions that happen in your life every day.

Because guess what? White people are the only people who can stop White Nationalism, White Supremacy, KKK….we are it!!! It is up to us, yes I am talking to you!!

I have always believed that understanding viewpoints is important, but we are at a time of action. I don’t really know what that action is for you, but you will.

Hatred is NOT ok!! If you see it speak against it!!

If marching in a rally isn’t your thing, then maybe stopping the jokes at work or maybe unfriending your bigoted friends, making sure they know why you made the choice.

Hell, ask someone who is not white about their journey, that alone may change how you view the world.

What I know for sure is that we were not born to hate….. it is taught!!

We also need to be taught to speak against it, I know it is hard. We could risk friendships or family relationships. But it is my belief that If we come at the discussion from a place of love we will have much more success than if we attempt to fight hate with hate!!

I hope that you can find it in your soul to step out of your comfort zone, we are all needed!!