Momma Marj Was Green and Didn’t Even Know It!! 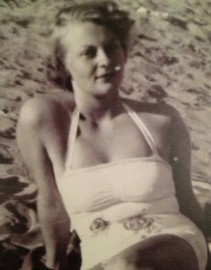 This Sunday will be the 12th anniversary of my mother’s death, not a day goes by that she doesn’t enter my mind in one way or another, a smell, something I’m reading and I think ‘Mom would love this”. But this week just before this anniversary is always a reflective week, a week to go through old photos, tell stories to my daughter and just really get in touch with her spirit. What I wouldn’t give to just curl up in her bosom and have her sing ‘When mothers of Salem’ to me, just one more time. ….oops sorry headed into memories, back to the blog.

I’ve always known that the way I was raised had much to do with the way I’ve come to honour Mother Earth, and the choices I make in my life to help to make people aware of environmental issues. So as I thought about this, did my mother see herself as “green”…..hell no!! An activist, my mother was not!! Did she think she was doing anything special…..nope!! Did I appreciate many of her choices…….NO!! You have no idea how much I wanted to try a TV Dinner, store-bought cookies or a comforter, but that’s just not how we lived.

To anyone who can say that was the 60’s and 70’s times were simpler then, I will tell you this my mother worked full time as an overnight nurse and raised five children, and for many years, was a single mother. So it’s not about time…..it’s about CHOICE!!

We had a huge vegetable garden in our backyard, no we didn’t live on a farm, we lived right in town. The garden produced a vegetable bounty for our family for most of the summer months. In later years her and my stepdad had a garden that was a farm-sized garden and was able to feed themselves and their friends and family. You would go for a visit and come out with 4 grocery bags full of produce.

All of the produce that was too much to eat over the course of the summer would be turned into the fall bounty. Dill Pickles, pickled beets, stewed Rhubarb, strawberry, raspberry, rhubarb jam along with frozen corn, peas, strawberries, and rhubarb. Whatever she didn’t pick from her garden she would get from the garden markets in the area. I remember vividly moving to Toronto when I was 18 and finding a jar of “Homemade” Raspberry jam on the shelf for $12, I called and said,” mom let’s start a business, these people have never seen homemade stuff!!”

My mother made it her mission to shop locally. Very rarely did we go out of town for anything. For her, the belief was, “if I live here then I support the people that live here too. “Was it more expensive, YES!! But she felt the community was worth it. Her clothes were bought at Prices, mine were bought at Kari’s Children’s wear, our meat at Sandell’s Meat Market, our bikes at Stoutenberg’s and our jewelry at Durrant’s Jewellers. Our groceries were bought at the local IGA that was owned by local men. When it was time for corn, off to Curries’ s; time for strawberries and asparagus off to Meester’s. Not only did she shop locally at shops and businesses that were part of the fabric of our local small-town community, we ate in season almost every day when we could. To be honest, until her dying day she wouldn’t thank you for a California strawberry out of season.

Many of our clothes were fashioned by my mother; she once got a “lot” of curtain material and ended up making dresses and jackets for my 3 sisters. In her downtime, she would knit, crochet and sew. Many a child wore my mother’s mittens and hats to keep them warm in the winter. She was a woman who loved to give gifts but they were almost always handmade treats, both savory and sweet.

Does anyone even do this anymore? My mother had her button bag and if we had lost a button we would bring the item to her and she would search her button bag for the perfect “almost” match and begin to mend the item. I was always grateful for her repairs as many times I would lose the button or rip my very favourite shirt. However, I BEGGED DESPERATELY not to have to wear a darned sock!!! UGH!! I hated the feel of that patch on the bottom of my foot, or even worse the doubly darned sock!!

So why did she do all of this?

This was at a time when conveniences had started to become the norm…trust me all I wanted was an OREO!!

Is there a choice here that you can make or adapt to your life now? Can you slow down enough to make a different choice?

Here is some of my momma’s wisdom!! 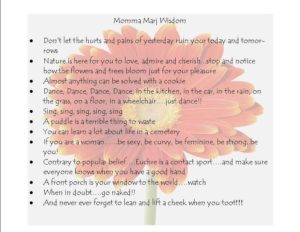