The story in between

It is always interesting to me to see people’s before and after pictures for anything in their life. A living room, a bedroom, a body, or a life. What’s interesting to me is not what you see in the before and after, but the in-between, that’s the story. Similar to a birthdate and a death date there is a dash and the dash is the story.. A life lived has far less to do with the dates of birth and death and much more about how someone lived their dash. The same can be said about before and after pictures, between those 2 pictures is a story, it can be a sad story, an angry story, or one of praise and thanksgiving. Two people can have 2 similar before and after photos but how they came about may be drastically different. For instance, I was asked recently about my choice to shave my head by someone I didn’t know, she had a shaved head as well.  She said,” what’s your story, there always is one when someone shaves their head.” I thought, nope I just wanted to, but looking deeper I said I guess I wanted a fresh start, I’ve just lost 30lbs and I wanted something to mark the idea that I was starting over. She said see, you have a story. Her’s was a brain tumor that nearly took her life, very different stories but similar before and afters.

Like her, I like to look for someone’s story wanting to know what happened between the two snapshots in time. It is what I believe makes me a great healer, my desire to know and understand the person they believe themselves to be with their story. What makes me a better healer is the ability to guide people out of their story, leading them to know when to put the story to rest and begin the journey of healing, the journey of a new story. So here’s my before and after story.

My “before” picture was taken on December 24, 2021, but that is not where my story began. For years I had struggled with my weight, my addiction of choice had always been food and because of that I struggled with what is now called disordered eating, in my 20’s most people just called it bulimia. My purging was not of vomiting but of the overuse of laxatives and because of it my body would go into complete dehydration, my eyes would dry up and my face would swell as if I was having an allergic reaction.

My story didn’t start in my 20s, some early childhood trauma set me on a path of emotional eating at the ripe age of 5 years old. Food was my old friend, the one who helped me after a day of teasing at school, the one who was there when I boy I liked called me fat,  food somehow made it all go away. The patterning was set in motion at a very young age and food continued throughout my life to be my emotional crutch. Cigarettes came along for the ride for about 15 years, but the food was always my most loved companion.

By the time December 24th rolled around I had been on countless diets, my health was in the toilet, my diabetes was completely out of control and my medication was increasing, and honestly, I felt like shit!!

As I say all of this, I have a great life, I live in gratitude every day that I get to play in the playground of this life in exactly the way that I do. But my emotional eating and being overweight always just felt like they were quicksand holding me back from an even better version of myself. I used to always say that there was a key I just didn’t know where it was hidden.

In my after picture, I am unrecognizable from the woman in the before pictures from my life. I almost feel that there is a before Purium Karen and an after and I know that sounds really crazy, but it is the truth, which is why I shaved my head.

That’s the story between the before and after.

But it doesn’t end there. I have never been more clear about the vision for my future.  It is my calling, my service, and my duty to unapologetically shout this information from the rooftops and help guide those who want to be guided to their most nourished life possible.

That’s what you don’t see in the after picture.

Everyday we are given the opportunity for a new beginning, a new “before picture.” It is up to us whether the “after picture” will stay the same or will we take the risk and make a change. 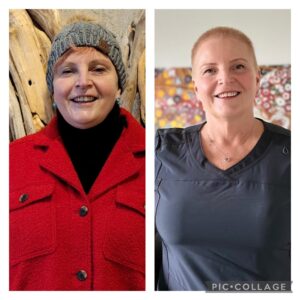